Roll over image to zoom in
Click to open expanded view

Compare
Categories: All Products, Smart Home Automation, Smart Home Products, Smart Security
Features:
PIR Motion Sensor Holder It is convenient and easy to use
You can conveniently to let the light auto on/off.
The switch can detect human body’s infrared, and use infrared to control the load.
Suitable for energy-saving lamps, LED lamp
Compatible with other lamp with E27 connector
Great for home, office, hotel, etc 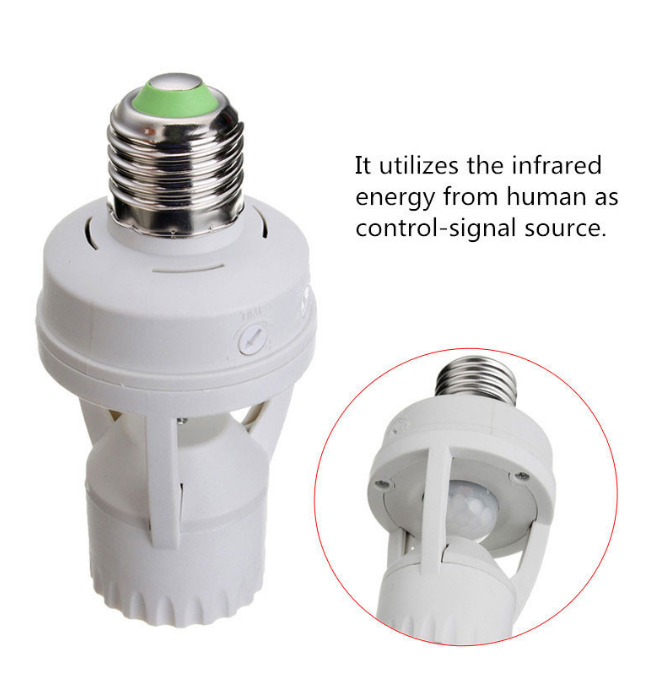 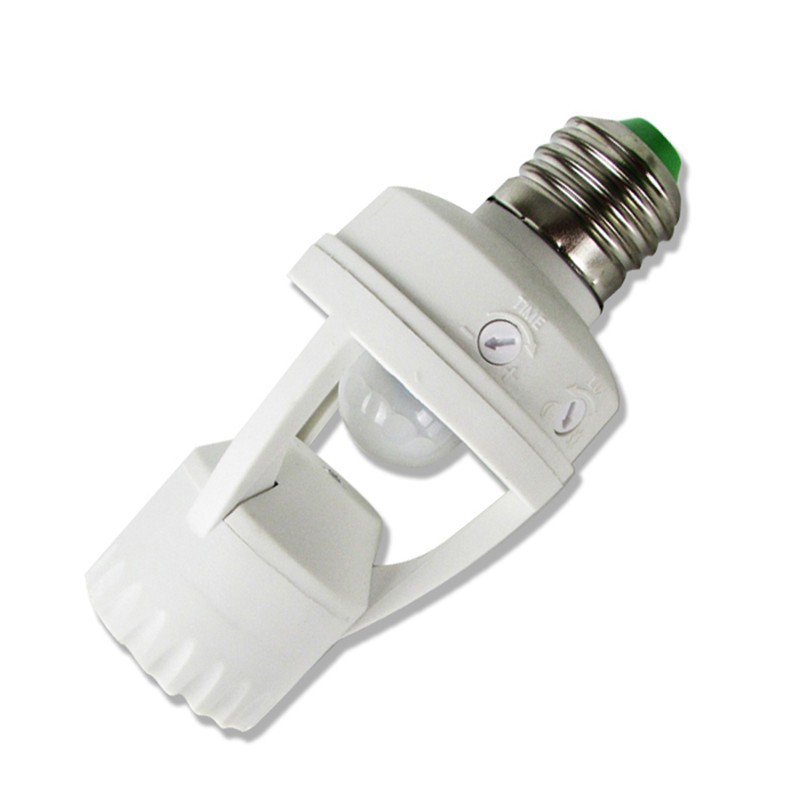 A PIR Motion sensor can detect changes in the amount of infrared radiation impinging upon it, which varies depending on the temperature and surface characteristics of the objects in front of the sensor. When an object, such as a person, passes in front of the background, such as a wall, the temperature at that point in the sensor’s field of view will rise from room temperature to body temperature, and then back again. The sensor converts the resulting change in the incoming infrared radiation into a change in the output voltage, and this triggers the detection. Objects of similar temperature but different surface characteristics may also have a different infrared emission pattern, and thus moving them with respect to the background may trigger the detector as well.[3]

PIRs come in many configurations for a wide variety of applications. The most common models have numerous Fresnel lenses or mirror segments, an effective range of about 10 meters (30 feet), and a field of view less than 180. Models with wider fields of view, including 360°, are available, typically designed to mount on a ceiling. Some larger PIRs are made with single segment mirrors and can sense changes in infrared energy over 30 meters (100 feet) from the PIR. There are also PIRs designed with reversible orientation mirrors which allow either broad coverage (110° wide) or very narrow “curtain” coverage, or with individually selectable segments to “shape” the coverage.

The PIR Motion sensor elements may be wired as opposite inputs to a differential amplifier. In such a configuration, the PIR measurements cancel each other so that the average temperature of the field of view is removed from the electrical signal; an increase of IR energy across the entire sensor is self-cancelling and will not trigger the device. This allows the device to resist false indications of change in the event of being exposed to brief flashes of light or field-wide illumination. (Continuous high energy exposure may still be able to saturate the sensor materials and render the sensor unable to register further information.) At the same time, this differential arrangement minimizes common-mode interference, allowing the device to resist triggering due to nearby electric fields. However, a differential pair of sensors cannot measure temperature in this configuration, and therefore is only useful for motion detection.

When a PIR Motion sensor is configured in a differential mode, it specifically becomes applicable as a motion detector device. In this mode when a movement is detected within the “line of sight” of the sensor, a pair of complementary pulses are processed at the output pin of the sensor. In order to implement this output signal for a practical triggering of a load such as a relay or a data logger, or an Alarm device alarm, the differential signal is rectified using a bridge rectifier and fed to a transistorized relay driver circuit. The contacts of this relay close and open in response to the signals from the PIR, activating the attached load across its contacts, acknowledging the detection of a person within the predetermined restricted area.

There are no reviews yet.