Roll over image to zoom in
Click to open expanded view

A tds3 meter inexpensive and convenient digital tool to instantly check your overall water quality. TDS = Total Dissolved Solids, which is any salt, metal or mineral in the water. With the push of a button, the tds3 mete can tell you your overall water purity level,which will be displayed on the screen in ppm (parts per million). The lower the TDS level, the purer the water, with 0 ppm being pure H2O. The TDS mete is great for checking your tap water quality, or knowing when to change a filter. (The meter does not test for biological contaminants.) The TDS is a great tool for drinking water,water filtration and purification, colloidal silver, hydroponics (test your nutrients), aquariums, RO/DI systems, pools and spas, commercial and industrial applications and more. The TDS is a rugged model that includes a protective carrying case. 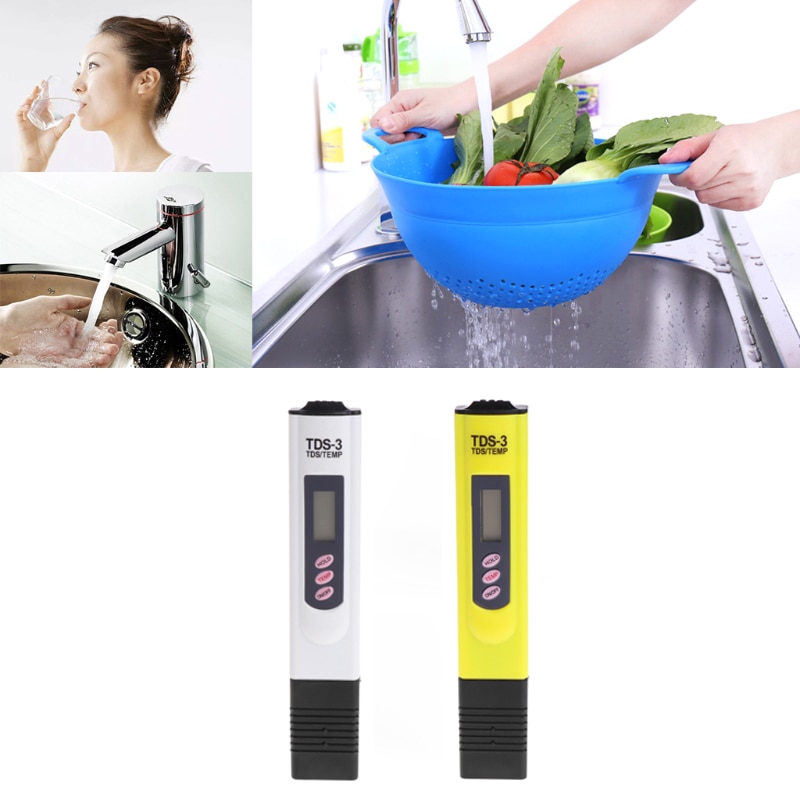 The tds3 meter is a measure of the dissolved combined content of all inorganic and organic substances present in a liquid in molecular, ionized, or micro-granular (colloidal sol) suspended form. TDS concentrations are often reported in parts per million (ppm). Water TDS concentrations can be determined using a digital meter.

Generally, the tds mete operational definition is that the solids must be small enough to survive filtration through a filter with 2-micrometer (nominal size, or smaller) pores. Total dissolved solids are normally discussed only for freshwater systems, as salinity includes some of the ions constituting the definition of TDS. The principal application of TDS is in the study of water quality for streams, rivers, and lakes. Although TDS is not generally considered a primary pollutant (e.g. it is not deemed to be associated with health effects), it is used as an indication of aesthetic characteristics of drinking water and as an aggregate indicator of the presence of a broad array of chemical contaminants.

Primary sources for tds mete in receiving waters are agricultural runoff and residential (urban) runoff, clay-rich mountain waters, leaching of soil contamination, and point source water pollution discharge from industrial or sewage treatment plants. The most common chemical constituents are calcium, phosphates, nitrates, sodium, potassium, and chloride, which are found in nutrient runoff, general stormwater runoff and runoff from snowy climates where road de-icing salts are applied. The chemicals may be cations, anions, molecules or agglomerations on the order of one thousand or fewer molecules, so long as a soluble micro-granule is formed. More exotic and harmful elements of TDS are pesticides arising from surface runoff. Certain naturally occurring total dissolved solids arise from the weathering and dissolution of rocks and soils. The United States has established a secondary water quality standard of 500 mg/l to provide for palatability of drinking water.

Total dissolved solids are differentiated from total suspended solids (TSS), in that the latter cannot pass through a sieve of 2 micrometers and yet are indefinitely suspended in solution. The term settleable solids refers to material of any size that will not remain suspended or dissolved in a holding tank not subject to motion, and excludes both TDS and TSS. Settleable solids may include larger particulate matter or insoluble molecules.

The two principal methods of measuring total dissolved solids are gravimetric analysis and conductivity.  Gravimetric methods are the most accurate and involve evaporating the liquid solvent and measuring the mass of residues left. This method is generally the best, although it is time-consuming. If inorganic salts comprise the great majority of TDS, gravimetric methods are appropriate.Electrical, or specific, conductivity of water is directly related to the concentration of dissolved ionized solids in the water. Ions from the dissolved solids in water create the ability for that water to conduct an electric current, which can be measured using a conventional conductivity meter or TDS meter. When correlated with laboratory TDS measurements, conductivity provides an approximate value for the TDS concentration, usually to within ten-percent accuracy.

There are no reviews yet.